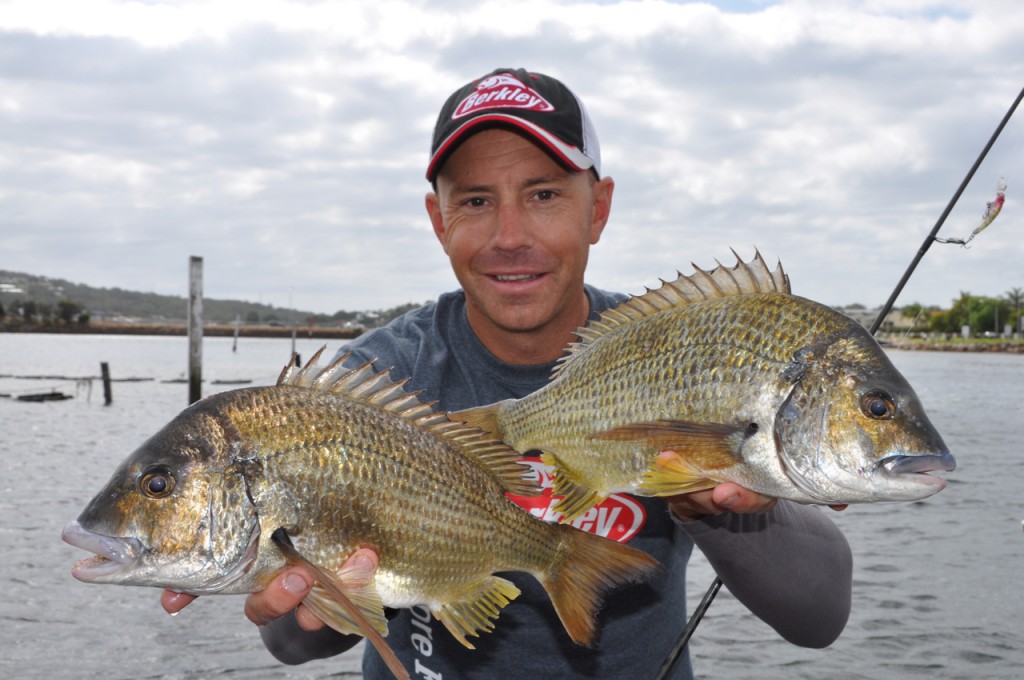 So, you’re keen to catch big bream on lures, but don’t know where to start. I remember that feeling. Perhaps you’ve caught a few relatively modest specimens and it’s now time to tackle the big bruisers.  Admittedly, figuring out all the subtle intricacies from scratch can be a somewhat perplexing exercise. To help simplify and accelerate the process, lets take a look at when, where and how to apply some proven big bream lure designs and techniques. First up in this three-part series – the diving bibbed minnow… 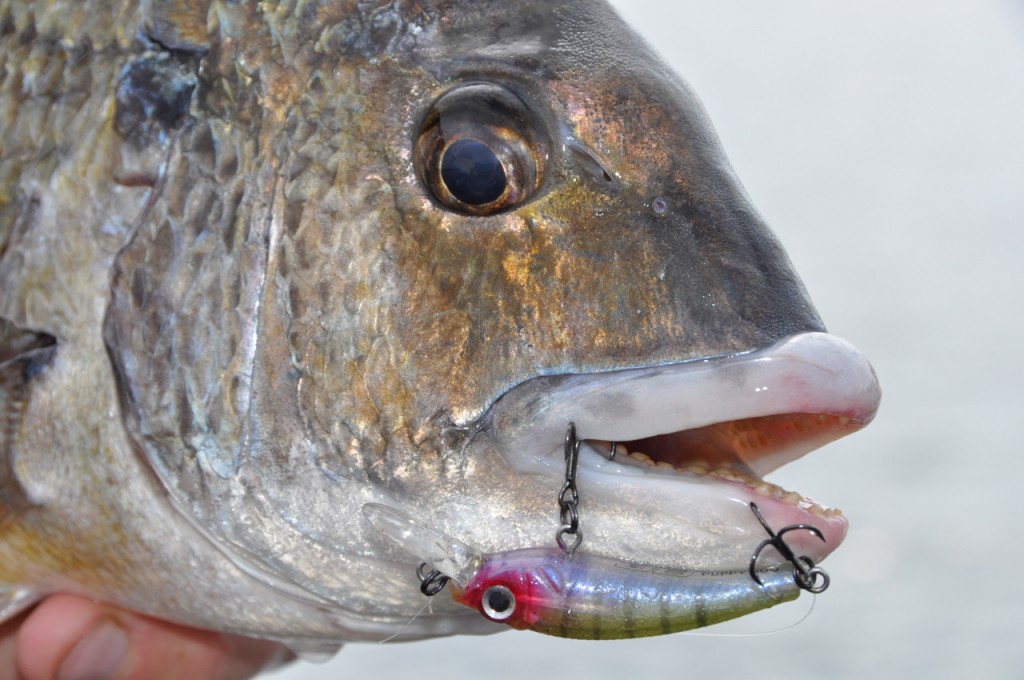 A relatively slim profile diving bibbed minnow, such as the 3B Crank Puppy Dog series, is a highly versatile tool capable of pulling bream from snags, oyster leases, moored yachts, channel markers, rocky edges, as well as wide open shallow flats. In southern parts of Australia, bream tend to be most active in these areas during the warmer months, anytime from say October-November through to April-May. Prawns, shrimp, crabs, yabbies, worms and even small baitfish are all fair game, which brings the ever-reliable Puppy Dog into play. 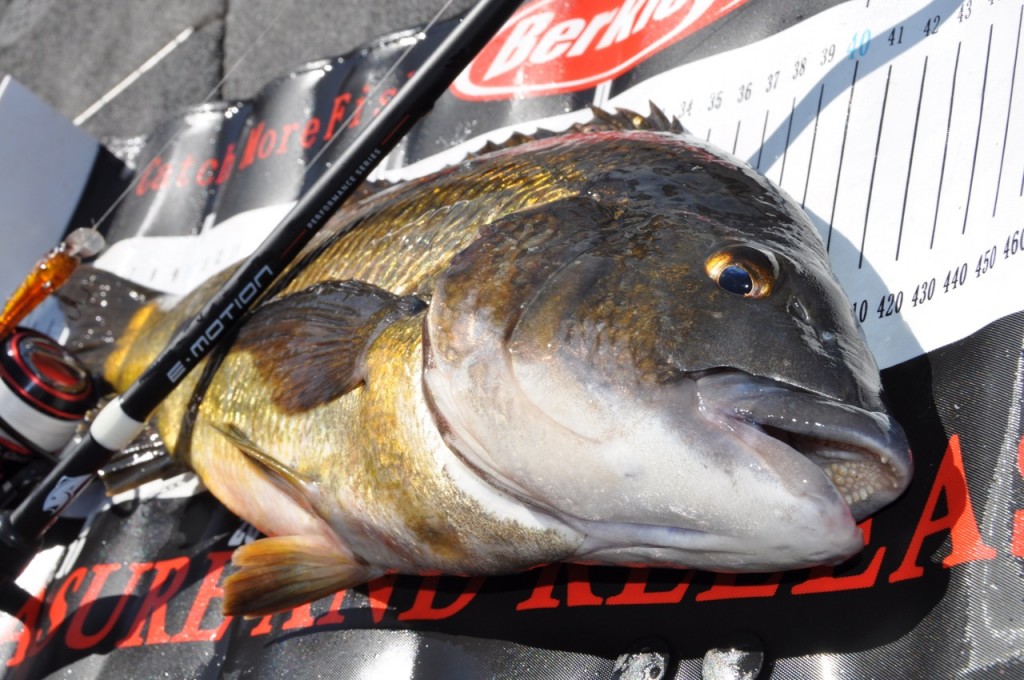 Southern black bream generally respond best to an erratic twitchy retrieve. Cast long on the flats or in tight at structure, engage the reel to swim the lure down to its optimum running depth and stop winding. A couple of short flicks of the rod tip, followed by a short pause, should have the Puppy Dog darting about left and right, much the same as a wounded baitfish on its last legs. Take up any slack line and repeat. Hits generally occur when the retrieve is momentarily paused and the lure stationary or suspended below the surface. Eastern yellow-fin bream prefer a more continuous steady paced roll, but will at times also react to a twitch and pause retrieve. When an enquiry transfers through the rod tip (usually by way of a subtle pluck or tapping sensation), simply continue winding until the sticky Owner trebles take hold. Once connected, apply some pressure to ensure the hooks set securely and hang on! Whereas big blacks give you a chance by initially shaking their head (in an effort to spit the lure) before realising what’s happened and attempting to flee, most yellow-fin bream immediately bolt for the horizon upon hook set.

As a silent runner with no inbuilt rattles, the 3B Puppy Dog is well suited to targeting wary fish in clear or highly pressured environments. Out of the box, it is ideal for both slow rolling or a twitch and pause style retrieve (as described above), diving to a maximum depth of approximately 1.2-1.5 metres. Upgrading the standard Owner #14 ST36BC trebles to #12’s will add just enough weight to transform this versatile little lure into a true suspender – a good option for searching a little deeper in the water column or whenever a longer pause is the order of the day. The Mongrel colour pattern is one of my absolute tried and trusted big bream favourites and has been for a number of years. Over the past month or so, the new 12 Gauge design has also accounted for several sizeable bream, well and truly earning its place in my tackle kit. 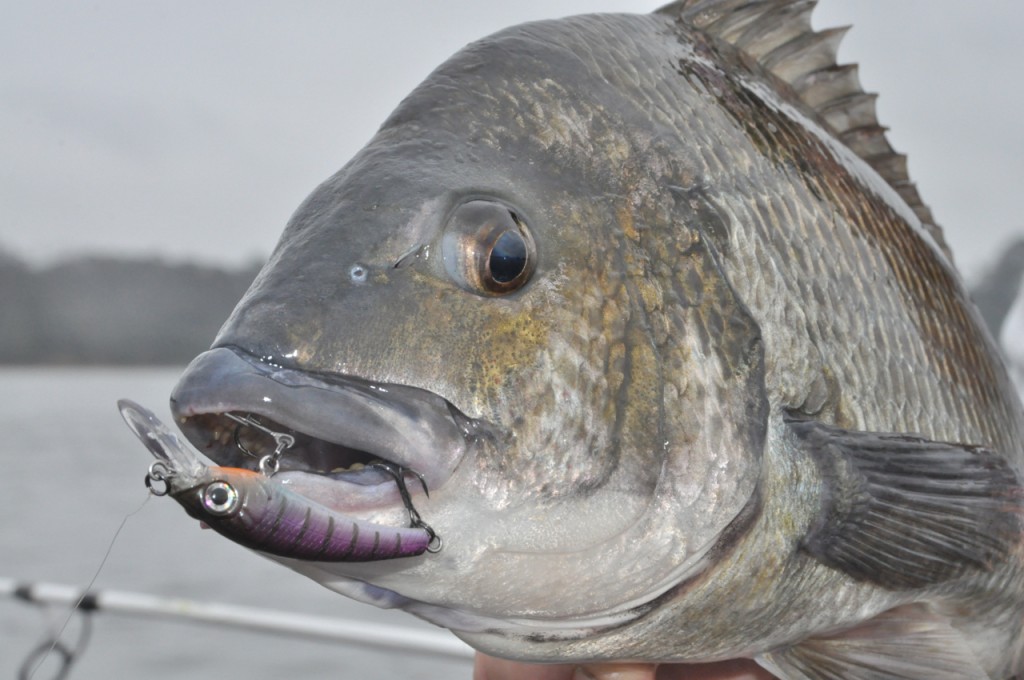 In terms of selecting a suitable light-casting outfit, I’ve been enjoying the performance of the Berkley E-Motion (1-5kg / 1-piece) spin rod of late. At just 6’8” in length, this unique blank offers a highly responsive tip, with some serious pulling power through the midsection – perfect for pitching small diving minnows at structure. Matched to an Abu Garcia Revo SX 20 thread-line reel spooled with 4lb Nanofil and connected to a rod length of 4-6lb Sensei fluorocarbon, this combo has indeed become my preferred option when targeting bream holding in tight to cover, be it timber snags, rock walls, yacht mooring lines and the like. The E-Motion series feature Fuji guides, a comfortable soft touch reel seat design and a very reasonably price tag. Another option is the Abu Garcia Salty Stage Light Casting (1-3kg / 1-piece) spin rod, which at 6’10” in length, is well suited for work out on the wide-open flats. Teamed up with an Abu Revo MGX 20, this ultra-lightweight outfit adds metres to my casting, which is essential when prospecting the shallows. 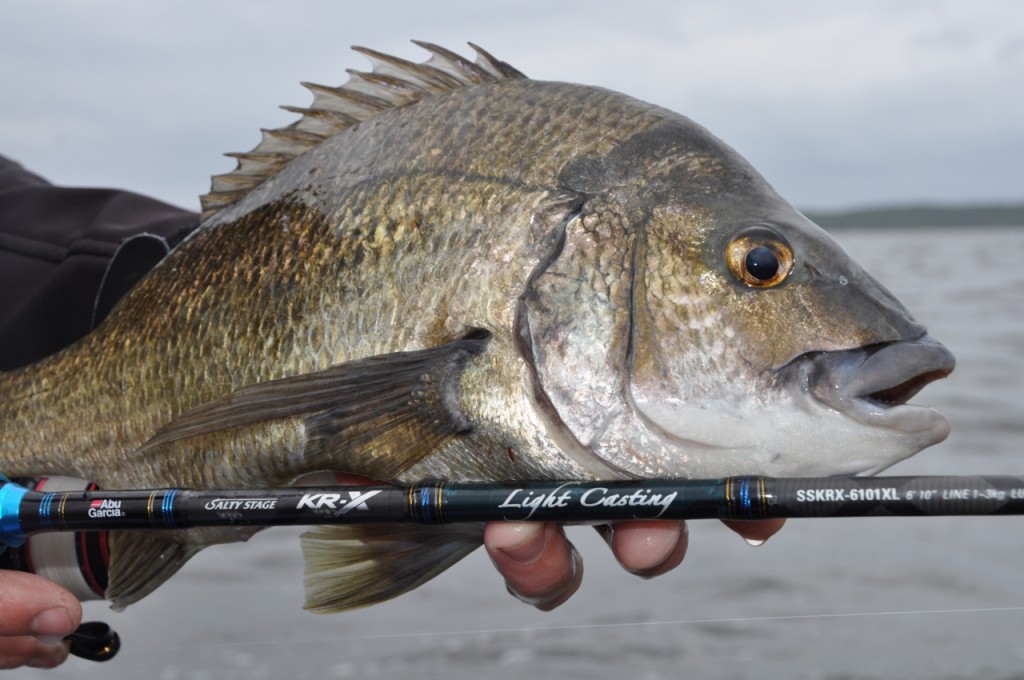